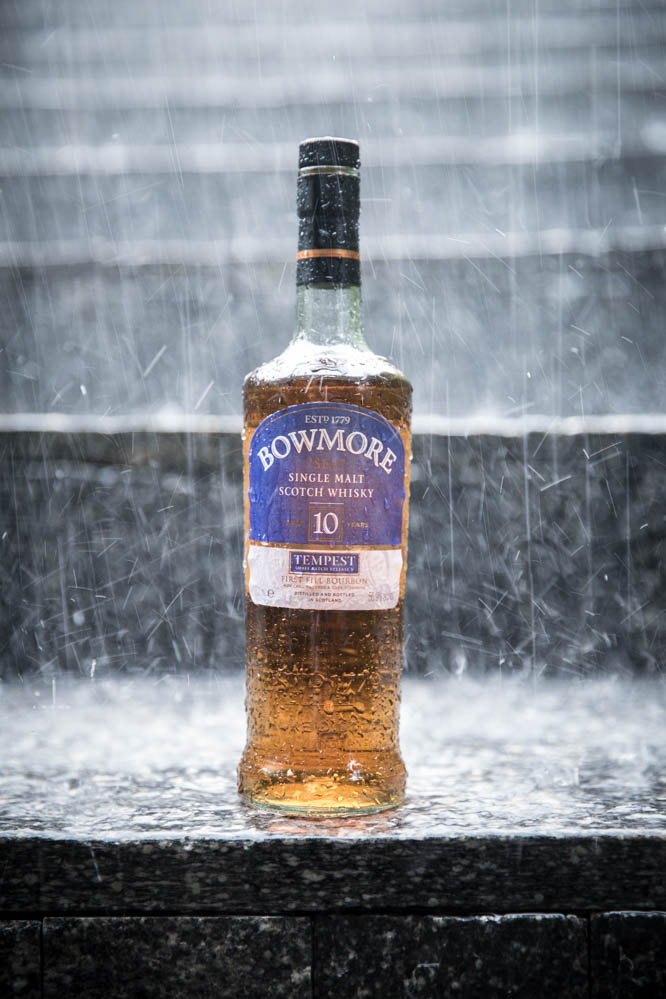 If love at second sight exists in the whisky world, then it happened to me with Bowmore.  Before visiting the distillery, I wasn’t really taken by any of its malts.  Most of them seemed to me like a smoky attempt to please those who don’t go for a smoky taste.  Their names, like Darkest, Black, Tempest, Sea Dragon – sounded pretentious, a way of conveying power where there wasn’t any.  To tell the truth, I had never really been interested in Bowmore.

Well, that was until I visited the distillery and was really able to see the meticulousness in Bowmore’s elaboration.  From peating the barley to the choice and combination of barrels, everything is thought out in detail.  Add to that the oldest whisky ware house in Scotland – the famous No. 1 Vaults – and more than two hundred and thirty years of experience in whisky production.  Bowmore is the oldest distillery on the island of Islay, known for its production of amazing smoky malts.  Bowmore Tempest is a perfect example of the best that Islay has to offer.

Bowmore Tempest is matured in American Oak barrels that previously contained bourbon whiskey.  They are first-fill barrels, which means it is the first time they are used to mature Scotch whisky.  Despite this, the influence of the wood is supporting, in this case the main actor is the whisky distillate with its unmistakable, peaty, smoky iodine flavour.  With an alcohol content of 55,1%, there is a certain aggressiveness – which is to be expected from a drink called Tempest.

Bowmore Tempest was a limited edition released in batches.  In all, there were six.  There were perceptible sensory differences from one batch to the next – something which was done purposefully – but all of them revolved around the smoke and salt theme.  The bottle of Tempest shown in the photo is from batch No. 4.

Bowmore’s master Blender is Rachel Barrie, the first woman to occupy the position of master blender in the whisky industry.  Rachel has a degree in chemistry and has more than twenty-one years’ experience in creating extraordinary whiskies.  In 1991, Barrie was accepted into the Scotch Whisky Research Institute after perfectly identifying more than twenty different fragrances, from tar to juniper, during her interview.  Since then, she has worked at Glenmorangie, and today leads whisky creation at the three Morrison Bowmore distilleries.

Tempest is a relatively oily, extremely peaty single malt with little maturation and high alcohol content.  This combination could go terribly wrong for most whiskies but works wonderfully well for peaty single malts from this island.  While Bowmore’s talent is to balance the taste of sherry with the smoky influence of peat, Tempest is a whisky that shouldn’t be ignored.  For those with a passion for peaty, spicy whiskies, Bowmore Tempest will be a case of love at first sight.

Flavour: Initially smoky and dry with caramel and wood undertones.  A spicy, peaty and smoky after-taste.

With Water: Adding water makes the whisky less aggressive and brings out the wood flavour.